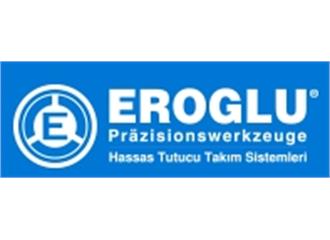 Eroglu Companies Group was established in 1978 by Mr. Nusret Eroğlu and there are 5 companies within the group today, and it is producing precision tool holder systems for CNC tool benches. Eroglu, who is the leader in its field in Turkiye, is one of the leading manufacturers in Europe.

Eroglu Makina San.Tic.A.Ş.; which is the production center of Eroglu Companies Group in Bursa, is functioning with its expert staff of 300 personnel, at integrated modern production facilities on a closed area of 65.000 m² and open area of 15.000 m².

Eroglu Prazisionswerkzeuge GmbH, which was established in 1997 in Germany-Mössingen on an area of 6000 m² open and 2000 m² closed, is the center of foreign marketing net.

Eroglu Companies Group gave the decision of making productions in Europe and as result of the investments Eroglu Präzisionswerkzeugfertigungs GmbH was established in 2007 in Germany-Mössingen on an area of 5000 m²open and2600 m² closed and became a manufacturing center producing high technology products.

Eroglu had established a marketing company in Iran in 2004 to increase its efficieny in Middle East and widen its recent market with its representative office formed in China in 2007.

Eroglu Takım Mak. San. Tic. Ltd. Şti., which is the center of domestic marketing net in Bursa, is giving marketing and technical consultancy within the Turkiye together with its branches and agencies in Istanbul, Konya, Izmir and Ankara.

Eroglu has DIN EN ISO 9001-2000, ISO TS 16949 and EN ISO 14001 quality certificates and is giving great importance on training and improving of employees for the continuity of customer satisfaction gained with its products and services. Eroglu is serving world-wide with its expert team consisting of 300 personnel and is forming qualified human resource by employing the personnel who are trained in ERTEM-Eroğlu Technological Training Center within the company.

Eroglu stands for reliability, quality and stable services given to the customers through sector experience of 30 years, created the EROGLU brand. Eroglu, which is on e of the leading companies of Europe, is continuing to raising the bar and making investments for the aim to be the leader in its sector in Europe.

Eroglu had formed an integrated facility with the infrastructures at the production center in Bursa in 2007 and has started a great renewing project till the year 2012. Within this project, making the ERTEM- Eroglu Technological Training Center a school giving occupational and technical training, increasing R&D investments by speeding up the useful model and patent studies realized with co-operating with the universities till today, and establishing the Eroglu Tecnopark as result of these studies are our priority tasks.